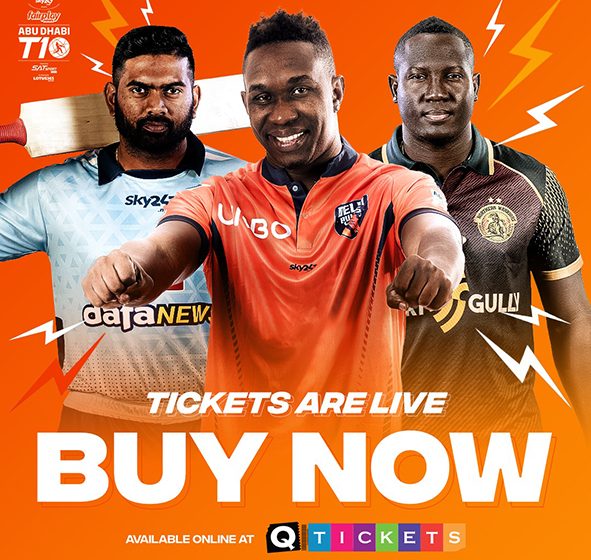 Season 6 of the Abu Dhabi T10 will see 8 teams to participate for the top prize.

The much awaited sixth season of Abu Dhabi T10 is around the corner with some of the best names in cricket coming together for the tournament. 8 teams will battle it out for the top prize over 12 days, beginning 23rd November with the final scheduled for 4th December. The final act of Season 6 of Abu Dhabi T10 will be an exciting closing ceremony concert which will begin at 8:30pm local time.

Tickets for the entirety of the tournament go on sale via Q-tickets on 15 November, with a wide variety of both individual, family seats and pods and corporate hospitality options.

The opening game will see the Kieron Pollard-led New York Strikers take on the Bangla Tigers captained by Shakib Al Hasan at 6:15pm and the second game of the day will see the defending Champions Deccan Gladiators, powered by West Indian stars Nicholas Pooran and Andre Russell, square up against crowd favourites Team Abu Dhabi at 8:30PM.

The top two ranked teams at the end of the league stages will go head-to-head in Qualifier 1, with the winner advancing to the final. The losing team of the first qualifier will then get a second chance at the Abu Dhabi T10 trophy by facing the winner of the day’s eliminator played between the sides placed third and fourth.

Cricket’s fastest format reached 342 million television and over-the-top (OTT) digital viewers in 2021, which resulted in sponsorship values increasing by 81%. Meanwhile the viewership numbers increased by 135% from the previous edition.