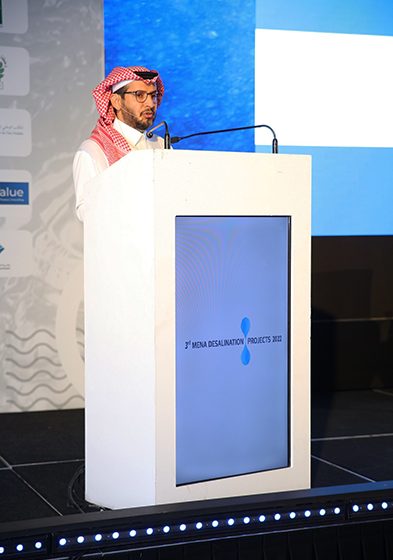 The 3rd MENA Desalination Projects Forum, taking place at Conrad Etihad Towers Abu Dhabi from March 15-16, 2022, examines the depth of the situation in water scarcity and desalination projects and discuss way forward – in line with the climate change target and reduction in emissions by 2030 and 2050.

Saudi Arabia announced more than 60 water projects, worth SR35 billion (US$9.33 billion), that will cement the Kingdom’s position as the world’s largest water desalination market, a top official told delegates at the 3rd MENA Desalination Projects Forum 2022 that got underway at the Conrad Abu Dhabi Etihad Towers Hotel.

“Saudi Arabia has been increasing its investment in clean energy, power and water. In the water sector, we have integrated the water desalination and wastewater treatment and have been expanding our capacities across the industry,” Engineer Khaled Al Qureshi, Chief Executive Officer of Saudi Water Partnership Company (SWPC), said in his keynote address.

“However, I am happy to announce that this year, we have approved more than 60 water and sewerage projects, worth more than SR35 billion, that will increase water desalination capacity as well as increase strategic water reserves and the capacity to treat more wastewater in the coming years.”

Once completed, these projects will increase the desalination capacity to 7.5 million cubic metres of water per day by 2027, from 2.54 cubic metres per day in 2021 – nearly tripling the capacity in just six years.

Saudi Arabia’s National Water Strategy published in 2018, adopted a sustainable approach to the water sector, committing to safeguarding the natural resources and the environment of the Kingdom and providing cost-effective supply and high-quality services

“We are developing strategic water reserves that should supply enough water to Saudi consumers in case of emergency. By 2029, we plan to raise the capacity to hold 45.7 million cubic metres of water – that will serve the entire country for a few days, if the water supply stops for some reason, he said.

“We are developing a network of 147 SSTPs with 14,925 kilometres of wastewater collection network that will recycle a large amount of wastewater across the country.”

SWPC, one of the leaders in public-private partnership projects in the GCC, has successfully achieved financial close of US$2.5 billion (SR9.4 billion) during the last two years.

There are more than $5.5 billion of water projects currently under construction. Saudi Arabia has adopted Public-Private-Partnerships as a procurement strategy, with 70 per cent of its water processing infrastructure projects procured on this basis.

Seawater desalination now contributes to more than 90 percent of all daily water requirements in the GCC region, according to a report. Desalination capacity of GCC countries is expected to grow further by approximately 37 percent during the next five years, with investments of up to $100 billion, according to reports. The global desalination market is predicted to grow from $17.7 billion in 2020 to $32.1 billion by 2027.

The news comes as 3rd MENA Desalination Projects Forum takes off today at the Conrad Abu Dhabi Etihad Towers Hotel, UAE, that examines the depth of the situation in water scarcity and desalination projects and discuss way forward – in line with the climate change target and reduction in emissions by 2030 and 2050.

More than 150 C-Suite Executives (CEOs and MDs) including more than 30 speakers, panelists are participating at the conference and exhibition where more than 30 exhibitors and sponsors display the latest innovation and technologies at the two-day event.

The MENA region contains more than 6.3 percent of the world’s population, but less than 1 percent of global water resources. Making up the predicted MENA water deficit in 2025 will require the production of an additional 237 billion cubic metres of potable water. By 2050, water scarcity could cost MENA between 6-14 percent of the entire region’s GDP each year.

In Saudi Arabia, the Saudi Water Partnership Company (SWPC) has announced that commercial operations on the Jubail 3A independent water producer (IWP) project will commence in the last quarter of 2022.

Leila Masinaei, Managing Partner, Great Mind Events Management and organizer of the 3rd MENA Desalination Projects Forum, says, “The depth of the water scarcity is getting from bad to worse. The governments of the MENA countries are seeking alternative ways to generate clean water, without harming the environment. Although there are new sustainable sources of generating water, such as from air, desalination still now remains one of the most viable sources to feed large communities. That way, the Middle East Desalination Projects Forum is one of the most important industry conferences that highlights the challenges as well as opportunities.

“We are happy to curate such an important industry conference and bring all the major stakeholders in this important event where senior government officials, private businesses, contracting companies, project consultants and water experts will discuss key issues such as new technology, reducing the cost of desalination, sustainability and energy efficiency at the two-day conference.

“Great Minds Event Management brings some of the strategically important industry events that are crucial for the future development of economy and society of the MENA region.”

Exhibitors, partners and sponsors were seen networking with key government utilities to participate in the new projects, which is going to help the industry expand in the next few years.

Rory Weaver, Marketing Director, FEDCO, said, “The Middle East is leading the way for the desalination industry in delivering larger projects than ever, at water tariffs that were unimaginable just a few years ago. The MENA Desal Forum is a crucial space to share the expertise and experience necessary to drive further innovation for the industry.”