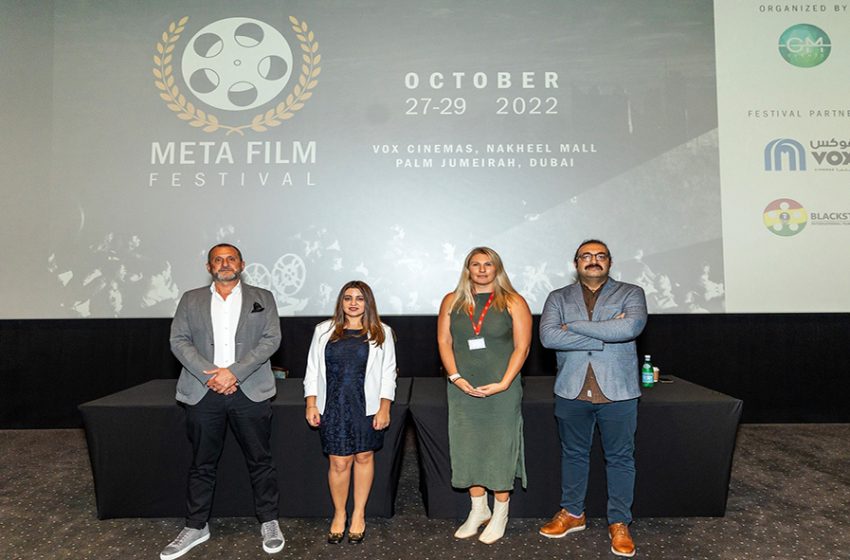 META Film Festival – a new international film festival will be held in Dubai from October 27-29 at the Vox Cinemas at Nakheel Mall in Palm Jumeirah, that organisers say, will gradually change the region’s growing film and entertainment industry while reinforcing Dubai’s position as a global entertainment hub.

Film makers from the UAE, Middle East and around the world can submit their content for inclusion in the screening schedule and the Awards programme. META Film Festival will play a paramount role in the global cinema industry as a vital platform in which diverse content is presented to an even more diverse consumer market, a vantage point of the festival being held in Dubai.

With this, Dubai will see the return of international film and entertainment festivities that will also promote the development of local and regional contents. This is the first film festival to take place in the UAE in five years and reflects a resurgence in entertainment activities in one of the fastest-growing economies in the world.

“META Film Festival will re-energise the film and entertainment industry in the Middle East and Africa as we also plan to support the development of creative films through a Film Fund,” Leila Masinaei, Festival Direction and Managing Partner of Great Minds Event Management, organiser of the META Film Festival, said at a packed press conference held at the Nakheel Mall.

“A first of its kind, the META Film Festival will spearhead the growth of the film industry in the Middle East and Africa – by attracting global talent, celebrities and movie buffs to Dubai. It will also bring the best of Arabic, Hollywood, Bollywood, European, Asian and African films and movie stars under one roof. The film festival will just add to the many reasons why stars and talents visit Dubai.”

“With a surge in the development of local contents and regional film production, we are determined to revive the film festival culture in Dubai, and provide a world-class showcase platform to regional production. The news has been filled with cinema powerhouses including Muvi Cinemas starting their own studios and Vox Cinemas aiming to produce 25 films in 5 years, to create Arabic content for the region. This festival will be the region’s own platform to premiere such local films.”

At the press conference, Leila Masinaei also explained how the interested film makers, directors, producers can submit their films, how films will get selected, what are the benefits, where and when the tickets will be available and other information regarding the festival.

“META Film festival will provide an opportunity for filmmakers, distributors, critics, and other interested persons to attend film showings and meet to discuss current artistic developments in film. I urge them to submit their films to the selection committee. META Film Festival will offer a platform for our filmmakers to present their creative ideas, their stories, their talent and skill in their making,” she said.

“In order to support the development of local and regional film industry, we are also announcing the establishment of a film fund that will finance two pre-production content ideas submitted by regional talent – one full feature film idea and one documentary idea that will be chosen for production, and will be subsequently screened at the festival’s future editions. These films will be supported through marketing and worldwide distribution. This feature is dedicated to discovering Arab talent and contributing to production of world class Arabic content.”

The event is set to bring the latest blockbusters as well as independent, regional, and local productions. The festival will conclude with a closing party and awards ceremony on the 29th of October, which will recognise and award the best films at the festival.

Casts and stars will accompany many of the hit releases on exclusive red-carpet appearances and after parties, with a chance for audience to interact with their favorite stars and filmmakers. Select movies and the live action surrounding the shows in Dubai will simultaneously be screened in seven different countries, Saudi Arabia, Bahrain, Kuwait, Oman, Qatar, Egypt, and Lebanon, making it the first of its kind in the world to expand the exposure of the films to even a wider audience.

Toni El Massih, Managing Director, Majid Al Futtaim Cinemas, said, “As a long-standing and avid supporter of the regional film industry, VOX Cinemas is proud to be a festival partner of the inaugural META Film Festival. Events such as this are essential to develop, promote and celebrate the cinema sector, particularly as the region becomes an increasingly important market to the global box office. Filmmakers, industry professionals and movie lovers can expect a diverse line-up of premieres, screenings and other cinematic events over the course of three days.”

“META Film Festival will also establish a film fund, which will enable the two emerging filmmakers to bring their scripts to screen. Nurturing the next wave of talent and providing a platform for their creative voices is a key component to building a thriving and sustainable film industry.”

A selection committee that consists of film industry experts and critics will pick the best movies from all over the world. By August end, the organisers will select all the films and confirm the celebrity list who will be attending the festival.

More announcements will take place between now and the festival date including the Premiers, Celebrity participation, blockbuster releases, etc. with lots of surprises, organisers, said.