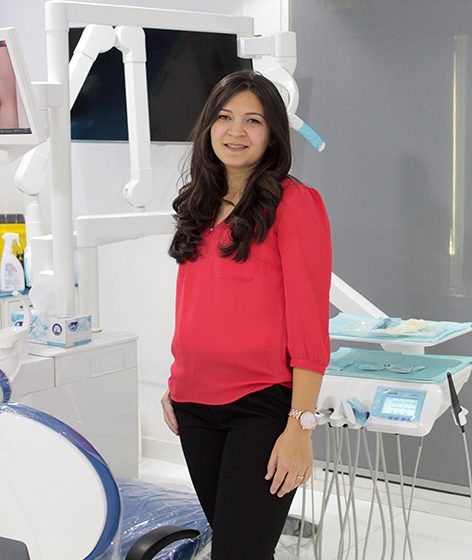 Malocclusion refers to situations where the teeth suffer from improper positions and/or there is a problem with the bite. Although genetics play a role, environmental and developmental factors play the more crucial part according to recent research. By definition, developmental malocclusions begin to show during a child’s growth period and continue to develop into adulthood, sometimes becoming more severe. Fortunately, this also means that they can be improved or even reversed with timely intervention.

Dr. Suzanna Almaali is a specialist in Orthodontics and Dentofacial Orthopaedics with 10+ years of experience in correcting malocclusion in children. Her clinical training at the American University of Beirut (AUB) followed by experience in the UAE treating a large variety of growing children has cultivated her special interest in preventive orthodontics. In today’s first part of this series, she shares with you the importance of an early assessment of children by an Orthodontist.

Gone are the days when the recommendation was to wait till age 12-14 years before seeing an Orthodontist (when all permanent teeth erupt).  This approach restricts the entire science of Orthodontics to “alignment of permanent teeth” when, in fact, Orthodontists are also involved in the guidance of jaw and facial growth (Dentofacial Orthopedics).

Evidence-based guidelines: The official stance of the American Academy of Orthodontics (AAO) is that every child should be assessed by an Orthodontist no later than the age of 7 years.

Early identification of dental and jaw development problems allows for intervention during a time when the child’s jaws are still growing and are therefore receptive to change and re-direction. This allows for the treatment of bite problems that would otherwise necessitate surgery in adulthood to correct jaw positions. Failure to treat the underlying jaw issues during the period of growth is one of the main causes adolescents and adults may need longer and more complicated orthodontic treatment (sometimes involving jaw surgery or extraction of permanent teeth).

Myth debunked: Malocclusions do not spontaneously correct when all the permanent teeth erupt. While some undesirable traits presenting in childhood are temporary, the majority of malocclusion traits do not disappear but rather persist.

Moreover, disturbances in the development and eruption of permanent teeth can be identified before they are fully set. Common problems include:

Commonly missed by parents: sometimes one permanent tooth replaces two primary teeth as it comes into the mouth. The parents don’t notice the problem since the permanent tooth has nicely closed the space available from 2 teeth, but there is an additional permanent tooth in the bone that does not have space to erupt!

Finally, the harmful effects to children caused by some malocclusions are reason enough to pursue early correction. In addition to the effects on self-esteem and the ability to thrive socially, children with excessive overbites (prominent upper teeth) are 3 times as likely to experience trauma and permanent injury to their upper front teeth compared to their peers with normal overbite.

The majority of traumatic dental injuries to the upper front teeth occur between the ages of 8 and 12, which is significantly before the completion of the permanent dentition. Early correction increases the chances of these teeth being protected from injury.

An assessment of your child at the age of 7 years allows for early identification and proactive prevention.It does not mean your child will definitely require early intervention or that you will be forced into unwarranted procedures. The goal is to allow you, as a parent, to become fully informed of your child’s orthodontic condition (i.e. the presence of a need, optimal time to start, different options available) in order to make your own fully informed decision.

It is therefore false to recommend the “wait it out” approach when it comes to orthodontics, because: