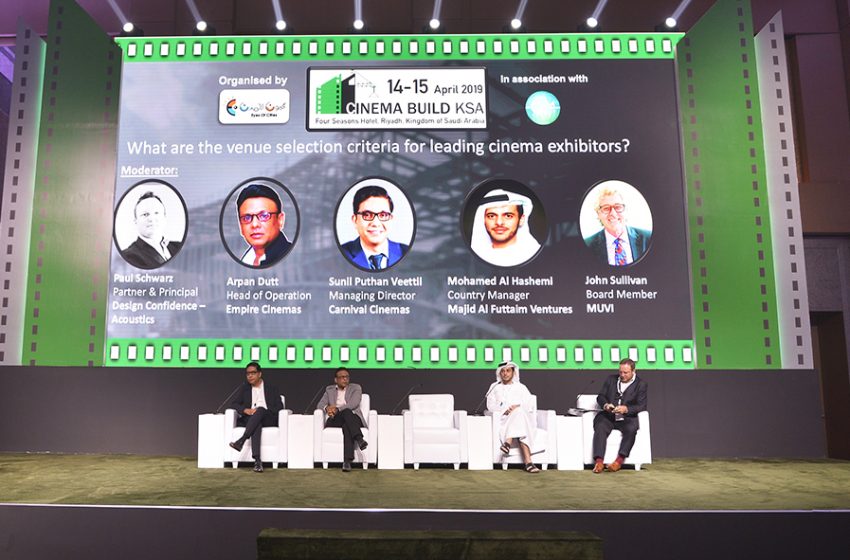 The Cinema Build KSA forum in Riyadh comes as the world eyes Saudi Arabia’s efforts to unlock the massive potential of its cinema market as part of wide-ranging Vision 2030 economic reforms.

Thirty-four cinemas have opened in 12 cities within six administrative regions in the kingdom with an addition of 342 screens and more than 35,000 seats, by the third anniversary of launching the cinema sector anew in the kingdom.

KSA was the only market in the world that grew by the box office in 2020, as screen estate doubled.

Over 12 million cinema tickets have been sold in Saudi Arabia since a suspension was lifted three years ago, despite enforced closures throughout the covid-19 pandemic.

Saudi Arabia wants to become one of the world’s top 20 film industries in the next few years, as per the new strategy that will establish the Kingdom “as a world-class film hub with a target to build an industry with a revenue of $500 million,” announced by the country’s Film Commission in November 2021 – which is going to boost the country’s entertainment industry.

The new strategy is going to speed up the investment and development process and Saudi Arabia will see a massive uptake in the construction of new cinema complexes – something that will be the focus of the 4th Cinema Build KSA convention that takes place in Riyadh from May 25-26, 2022.

“As life returns to normal after the COVID-19 pandemic, we are happy to announce that the 4th edition of Cinema Build KSA is getting ready to welcome all industry experts and stakeholders in Riyadh – where we have lined up a lot of innovative sessions, engaging seminars and thought-provoking discussions,” Leila Masinaei, Managing Partner, Great Minds Event Management, says.

“This significant event takes place six months after the announcement of the game-changing Cinema Industry Strategy announced by Saudi Film Commission which will change the entertainment industry in Saudi Arabia.”

“The forthcoming edition of the Cinema Build KSA will consist of an innovative session that will highlight the latest solutions, technologies and key innovations. Also, being the largest gathering of cinema stakeholders in Saudi, Cinema Build KSA 2022 will be serving knowledge for building world-class cinemas.”

To date, over 34 cinemas in 12 cities are operating at full capacity, with a total number of 342 screens and over 35,000 seats. Saudi Arabia is set to receive up to 40 new cinemas following a deal signed by the nation’s Public Investment Fund (PIF). The Development and Investment Entertainment Company (DIEC), a PIF subsidiary, has partnered with the US-based satellite television channel, AMC, to operate new cinemas in the country.

“We estimate the Kingdom’s cinema box office market could be US$950 million in 2030. With non-admission (F&B / concessions and advertising) typically comprising 35% of overall revenue, the cinema industry has the potential to generate total revenue of US$1.5 billion in 2030 and develop into a lucrative revenue stream for the industry players and the government,” PwC said in a research report.

The cinema industry stakeholders are getting ready to join the 4th edition of Cinema Build KSA from May 25-26, 2022. The two-day cinema industry convention will address key issues and highlight the development of the cinema industry in KSA. The event will also highlight new building solutions and equipment used in developing future cinemas, multiplexes and malls.

The event will bring all the stakeholders on a single platform to brainstorm the continued development of the industry and identify opportunities going forward. It will host seminars, workshops, and expert sessions, as well as showcase new products.

Alejandro Aguilera Garibay, Chief Executive Officer, Cinepolis Gulf, says, “Cinépolis Cinemas considers Saudi Arabia as the prime territory for expansion in the next few years. Despite the already immense growth in a number of screens we’ve seen, we predict the industry could increase by up to 1,000 screens throughout the Kingdom within the next three years.

“In line with the 2030 vision, the overall market in Saudi Arabia has and is growing exponentially, with the cinema industry showing the same trend. Cinépolis Cinemas is eager to be a part of the transformation of the Kingdom aligned in line with the overall vision, and with this, the opportunity to bring cinemas to cities across KSA.

“For Cinépolis Cinemas, we see vast potential in the smaller cities the Kingdom has to offer. We have developed a robust business model catering specifically to our demographic and look forward to bringing the Cinépolis Cinemas experience to those cities in the upcoming years.”

Saudi Arabia is witnessing growth in the cinema market while many other countries around the globe are facing a slowdown off the back of the pandemic. With 2021’s most anticipated movies performing better in KSA compared to other gulf countries, the Saudi cinema goer’s appetite cannot be catered to by the existing cinemas, creating a continuous demand for new cinemas to be built.

The Saudi cinema industry with enormous potential is growing rapidly and steadily as it is led by great leadership and industry stalwarts. With a great amount of groundwork done in the past 3 years, the cinema industry in the Kingdom is on its path to becoming the leader in the region and has already gained attention from cinema stakeholders from across the globe.

Cinema builds KSA, will focus on the challenges faced by the cinema industry, changing trends as well as focusing on the new cinema projects that will drive the growth of the industry.

International players are excited by the Kingdom’s cinema prospects. A number of cinema complex projects are currently in the pipeline or in various stages of development.

The participation of AMC entertainment, the world’s largest cinema operator and DIEC is expected to give a boost to the development of the cinema industry in the Kingdom. In April 2018, DIEC opened its first cinema in the King Abdullah Financial District and aims to open 50-100 cinemas across Saudi Arabia by 2030.

Muvi has an aggressive expansion plan over the next few years, the company plans to open hundreds of screens all over Saudi Arabia, offering customers a vast range of unique experiences.

Muvi Cinemas intends to grow to 307 screens nationwide by mid of 2022, launching 23 new sites in eight key Saudi regions, adding 204 screens and 22,872 seats to its portfolio. The expansion will bring the brand’s total number of seats to over 35,000.

The state-of-the-art five-screen cinema, accommodating 650 moviegoers, will open in the summer of 2022. SICO signed a contract with Muvi Cinemas in August 2021, to set up a cinema complex in Quwaieyah Mall.