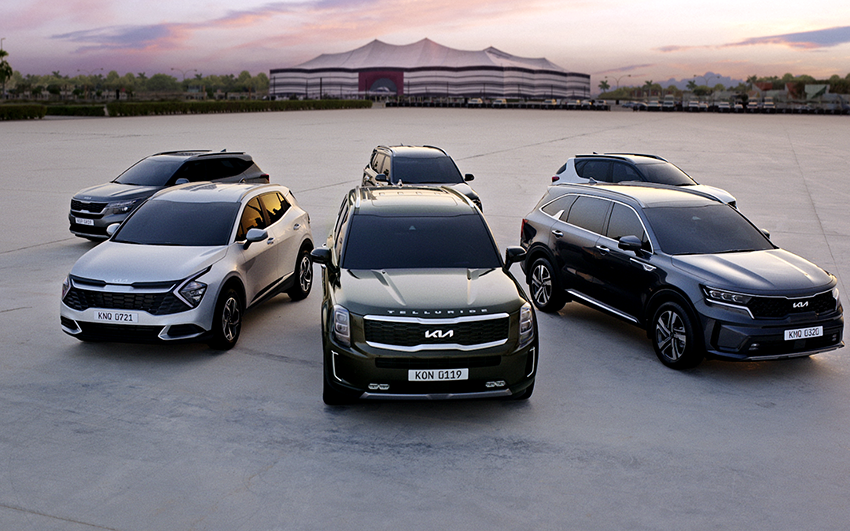 Kia has kicked off its global brand campaign for the FIFA World Cup 2022™ by launching several marketing activities associated with the tournament, which runs from November 20th to December 18th.

In alignment with Kia’s key brand message for this year’s World Cup, ‘Inspiration. It’s in all of us,’ Kia will feature a range of initiatives showcasing the brand’s dedication to the sport and its contribution to uniting people from all over the world in their belief that their team has a chance of reaching the very top.

Adding to the excitement, Al Majid Motors, the exclusive dealer for KIA in the Middle East, is giving away ten skybox tickets to enjoy the World Cup via a contest on the company’s social media. Those interested in participating need to follow the account, leave a comment on the relevant post stating what type of fan they are with #KiaUAEWorldCupFan and tagging @KiaMotorsUAE.

Every four years, humanity learns that football is not just a sport; it’s a movement. Every shot, every tackle, and every second gives people the belief that they are capable of great things. To that end, Kia will unveil a campaign hero film featuring the daily lives of people who are inspired by the moment of the World Cup on TV and social medial channels, including YouTube and Instagram.

Plus, the brand will begin a social media campaign, #KiaInspireTogether, encouraging football fans to create own UGC (User Generated Content) showing their passion for their teams. The best UGCs will be used as highlight videos by Kia, and the videos will eventually be showcased through electronic boards at the stadiums. Rafael Nadal, Kia’s Global Brand Ambassador, along with other influencers, will also upload videos cheering for their national teams to encourage more fans to take part in this campaign.

Kia’s OMBC (Official Match Ball Carrier) campaign will highlight the dreams and inspirations of 64 children from about 20 different nations globally for the once-in-a-lifetime experience of carrying the official match ball to the pitch alongside the players and match officials.

In addition, Kia will document the children taking one step closer to realizing their dreams through the OMBC experience and promote their stories through social media. In doing so, the brand will aim not only to enhance the experience of children participating as OMBCs, but also to demonstrate how every single move can become a significant leap towards achieving any life goal.

As the official mobility partner, Kia will provide a fleet of vehicles for use during the FIFA World Cup 2022™ to facilitate the safe and convenient mobility of players, referees, management and staff. 297 passenger cars (including Telluride, Sorento, Sportage and Carnival) will be joined by 80 of Kia’s most eco-friendly models (EV6 GT-line, Sorento PHEV and Niro PHEV) as well as 70 buses for this purpose. This will mark the first time for Kia to operate eco-friendly vehicles in the FIFA event.

To further elaborate on the vehicles, EV6 GT-line will also be featured in Kia’s digital content collaborated with FIFA+ (FIFA’s OTT platform), and the content will feature football legends riding an EV6 GT-line and having an interesting talk about the World Cup.

Charles Ryu, Senior Vice President and Head of Purchase CX Design Sub-division, said, “Kia believes that the FIFA World Cup 2022™ is a huge cultural movement beyond just a sports event. As a FIFA official partner, we are delighted to have this opportunity to deliver special experiences to people worldwide who have been exhausted by the long COVID pandemic. Like our campaign message ‘Inspiration, it’s in all of us,’ we hope that people of all ages and backgrounds will discover new inspiration in their lives as they watch the exciting moments of the World Cup unfold before their eyes.”

Since 2007, Kia has been an official automotive partner of FIFA, providing vehicles from its wide-ranging model line-up to FIFA and FIFA events and boosting its brand recognition through various marketing activities and A-board advertisements in the stadiums.