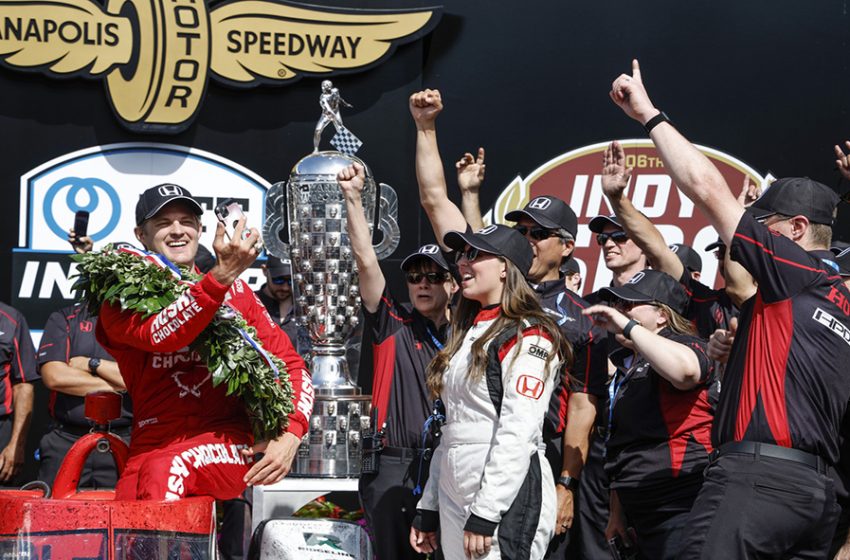 Starting from the middle of row two, Ericsson would lead 13 laps in his Chip Ganassi Racing Honda en route to victory. It wasn’t without drama for the driver of the #8 machine, however. Despite pulling a three-second gap on the field with just 10 laps to go, a late-race red flag—the result of a crash by Ericsson’s teammate Jimmie Johnson—would allow the field to catch up and challenge Ericsson for the win of a two-lap shootout.

In addition to Ericsson, the day was largely dominated by the Honda-powered Chip Ganassi Racing organization. He and his CGR teammates would lead a combined 163 of 200 laps, with Scott Dixon leading the pack with 95 laps led and becoming the all-time lap leader in the Indy 500.

Dixon would, unfortunately, fall victim to a late-race pit lane speeding violation, while 2021 Champion Alex Palou (47 laps led) would be caught out by an ill-timed yellow on pit strategy. Dixon would ultimately finish 21st and Palou would recover to a ninth-place finish.

Tony Kanaan would finish third on the day. While 2016 Indy 500 winner Alexander Rossi would storm from 20th to fifth and four-time ‘500’ champ Helio Castroneves from 27th to seventh.

Honda also took top honors in the highest-finishing rookie category, with David Malukas crossing the line for Dale Coyne Racing with HMD Motorsports in 16th place. In addition to forever being an Indianapolis 500 champion, Marcus Ericsson also takes the lead in the 2022 INDYCAR championship points after six of 17 races.

Honda Results from the 2022 Indianapolis 500

Marcus Ericsson (Chip Ganassi Racing Honda) Indianapolis 500 race winner, Honda’s third consecutive win at Indy; moves to the top of the championship points lead after six of 17 races: “You know, it’s the biggest race in the world and to win is just an incredible feeling. The way we had to it – with the pressure [of the late-race restart] at the end – it was a very tough finish. I needed all that Honda power to be able to pull it off! So we’re very, very thankful for that. It’s just an incredible feeling. We’ve been strong all month, both our Ganassi cars and all the Honda cars. We’ve been the ones to beat, to be honest. To end up in Victory Lane, it’s just a dream come true.”

Tony Kanaan (Chip Ganassi Honda) Finished third: “A great win for Honda, a great win for the team. I mean, [team owner] Chip [Ganassi] only asked us to do one thing: ‘don’t hit your teammate’. I was thinking about that when we restarted after the last yellow [caution flag].

Marcus [Ericsson, teammate, and race winner] did an awesome job and deserved to win. I’m already looking forward to coming back next year.”

David Malukas (Dale Coyne Racing with HMD Honda) finished 16th, highest-finishing rookie: “It feels really good. I mean, that was such a long race. This track, it chooses its winners for sure. We were in the top 10 the whole way, then a yellow [caution flag] comes out that’s simply bad timing for us, and drops us down to about P20. But then we worked our way back up to 16th so, overall, we finished the race and I’m really happy.”

David Salters (President, Honda Performance Development) on Honda’s 15th Indianapolis 500 win and third consecutive victory: “Racing comes down to a team effort, United groups of talented people pushing themselves, working smart and hard. That’s three [Indianapolis 500 victories] in a row for the amazingly talented group at HPD – bravo boys and girls!! The amazing team at Chip Ganassi Racing produced rocket ship race cars – again what a team of talented boys and girls. We are extremely proud to race for Honda and the culture of racing and success in Honda continues to show itself, with Monaco [Formula One] and Indy 500 victories today – nice work everyone!! Cheers!!”

Honda has won more Indianapolis 500 races than any major automaker: 15 victories from 22 races – a win ratio of 66% – since the company entered the INDYCAR competition in 1994. Honda first won the ‘500’ in the manufacturer’s fourth attempt, when Buddy Rice piloted his Rahal Letterman Racing Honda to victory in 2004.

After an incredible “Month of May” at Indianapolis, the NTT INDYCAR SERIES continues next weekend with the June 3-5 Detroit Grand Prix race weekend, on the Belle Isle street circuit in Detroit, Michigan.