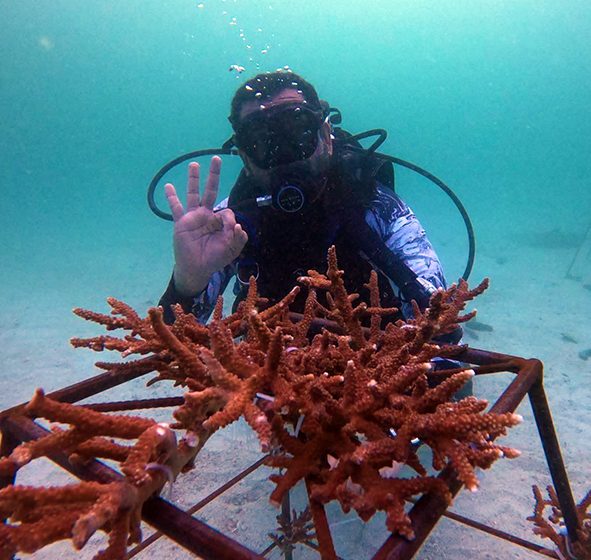 Dubai, UAE June 22, 2022:  Emirates Draw recently celebrate a new milestone in its Coral Reef Restoration Programme with the planting of over 4,000 coral polyps across various sites. Representatives from the socially responsible organisation as well as members of the media toured an existing planting site in Khor Fakkan in Sharjah to learn about its progress as well as a new site in Dibba, Fujairah, where planting is currently underway.

The second site was selected after months of inspections by marine experts, who used in-depth research methodologies to ensure that planting will be successful as well as any future expansions. Thousands of coral polyps have already been planted by experienced divers with the support of volunteers in various sites across the UAE. The community-driven programme aims to preserve and regenerate aquatic ecosystems across the UAE to provide real and lasting ecological impact on the country’s marine environment and surrounding coastlines.

It is a part of Emirates Draw’s vision and dedication “For A Better Tomorrow” through supporting the country’s national conservation agenda, which focuses on large-scale environmental priorities.

“We are building on our ongoing efforts with the support of Emirates Draw for our pioneering environmental initiative, which aims to rehabilitate coral reefs and protect the wider marine environment. The programme also intends to encourage fisheries and diversify recreational and tourism activities, in support of the UAE’s efforts regarding sustainability for a better tomorrow for future generations,” said Captain Saleh Al Thahori.

Since its inception nine months ago, the socially responsible organisation has distributed over AED 26 million in prize money to over 19,000 participants. This includes its one-of-a-kind AED 7 prize category, which allows nearly 10% of all participants to become instant winners by just matching the first number from the right. The AED 100 Million Grand Prize, the largest in the region, remains up for grabs to be claimed by a single person or group of people who match all seven numbers from right to left.

Optimistic participants have another chance to try for the life-changing prize during the next draw round, which will again be broadcast live on Sunday, June 05, 2022, at 9 PM UAE time.

Entrants can choose to participate in the weekly draw by purchasing an AED50 pencil that will support the planting of coral polyps at www.emiratesdraw.com. After registering online, participants can select their seven-digit number or have the system choose their number randomly.

Be the next lucky winner and book your numbers early!