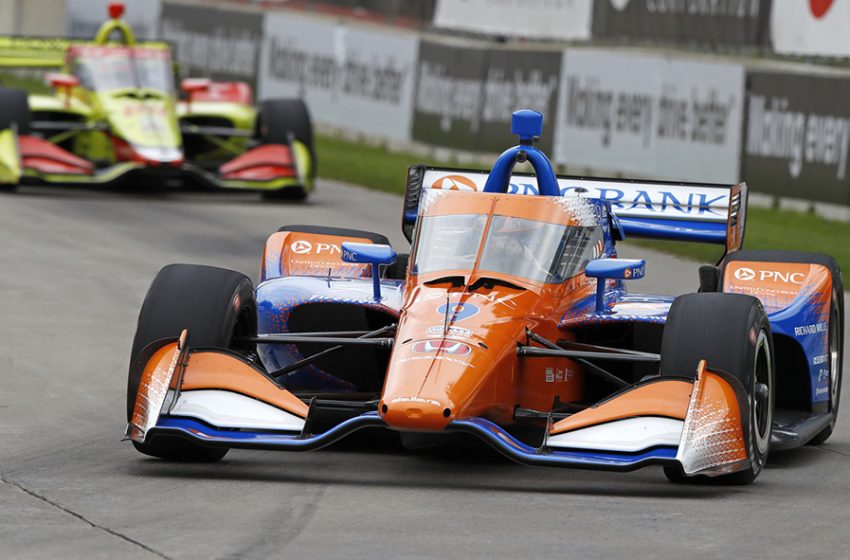 Strategy was the word of the day at Detroit, with all three podium finishers using different race and pit strategies to make their way forward—choosing different stint lengths, as well as different times to use the Firestone Black (primary) and Red (alternate) tires—in a race that ran completely caution-free. Rossi’s strategy of choice allowed him to close more than 15 seconds to the leader in the closing stages, finishing just one second back at the checkered flag.

Alex Palou moved up 12 positions after struggling in qualifying to finish sixth, and his Chip Ganassi teammate—and newly-minted Indy 500 winner—Marcus Ericsson crossed the line seventh. Colton Herta and Simon Pagenaud would also notch top 10 finishes for Honda, while David Malukas would finish just outside the top 10 in 11th, but score highest-finishing rookie honors for the second week in a row, as well as fastest lap of the race.

Alexander Rossi (#27 Andretti Autosport Honda) Finished 2nd: “One more lap and it might’ve been a different story.  But it was a good day for the team and Honda.  We come here with the fastest car every year, but can’t seem to get a win.  Will [Power, race winner] obviously did an amazing job, so we will take second and move on to Road America.

Scott Dixon (#9 Chip Ganssi Racing Honda) Finished 3rd: “That was a decent run for us.  I feel like we were maybe a little too conservative on the opening stint [on the softer “Red” tires].  I knew the Reds were going to be fast at the start, and was probably biding my time a bit too much.  Congratulations to Will [Power], he drove a fantastic race.  But really happy for Honda, and to be back on the podium for them.  And a great job by the #9 crew all day long.”

Alex Palou (#10 Chip Ganassi Racing Honda) Finished 6th: “This is almost a win for us today. Today was great! No cautions [in the race], but we still made it from 18th to sixth, that [result] was all on pure pace, strategy and perfect pit stops. [The middle stint on degrading “Reds”] was tough! It was really tough to keep [the Red tires] alive, but there are so many people going so fast, and challenging you for position, so you tend to go faster than you should with those tires. But, I thought it was amazing that the drivers really made a difference in how we treat the tires and strategies. There are people on the podium with three different strategies, so I thought it was a really good race. Obviously, it was super hard to keep the pace up without overheating those tires, but, I’m happy! Next, we’re heading to Road America, which is a track I won at last year, so I’m really happy to go back.”

Kelvin Fu (Vice President, Honda Performance Development) on today’s Detroit Grand Prix: “That was a great job by Alexander Rossi today, to carry over his strong performance from the Indianapolis 500, and the whole Ganassi team as well—with three cars finishing in the top 10 here at Detroit. This race is always difficult on the cars and on teams with the bumps and short turnaround time from Indy, but we are happy to have placed six cars in the top 10 and 10 of the top 15 for Honda in our last visit to Belle Isle. Looking forward to making the move to the streets of downtown Detroit next year!”

Honda and Honda Performance Development, the North America racing arm of Honda Racing and Acura Motorsports, come to the Detroit Grand Prix seeking to continue a run of major race wins in 2022, including last weekend’s 15th – and third consecutive – Indianapolis 500 triumph for Marcus Ericsson in his Chip Ganassi Racing Honda.

The company repeated that feat in 2022, with Meyer Shank Racing leading a 1-2 finish for Acura at Daytona in addition to Ericsson’s thrilling victory at Indianapolis last Sunday.

The NTT INDYCAR SERIES is back racing next weekend at the National Park of Speed, Wisconsin’s Road America June 10-12.