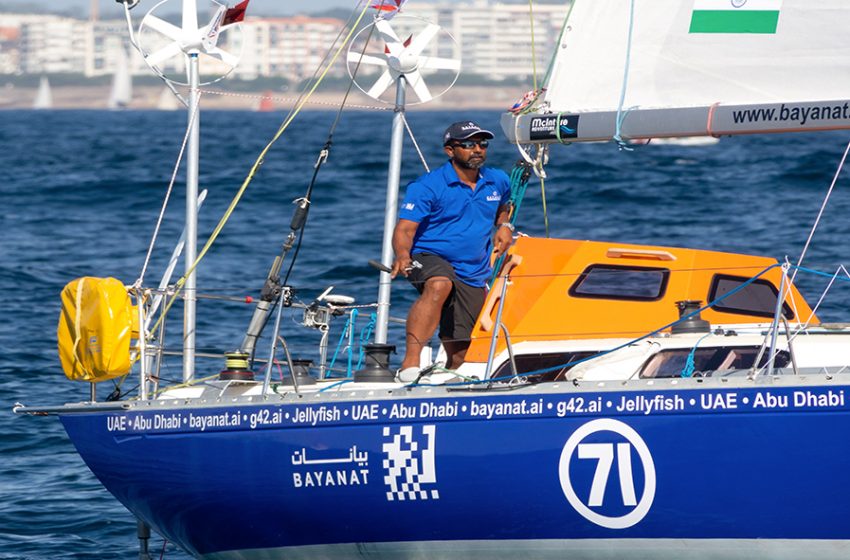 Abu Dhabi, UAE, September 5, 2022: The 2022 edition of the Golden Globe Race, one of the world’s most challenging feats of human endeavour, began yesterday with former Indian Navy Commander Abhilash Tomy competing at the helm of the UAE-registered boat ‘BAYANAT’. The journey of 48,000km is likely to last around 10 months.

First held in 1968, the Golden Globe Race requires participants to sail alone in long-keeled production boats designed prior to 1988 and using technology only available in 1968. Such is the scale of the task, that, fewer people have circumnavigated the world solo by boat than those who have reached the summit of Mount Everest or travelled to space.

Bayanat, a G42 company based in Abu Dhabi that provides AI-powered geospatial intelligence solutions, is sponsoring Abhilash’s participation in the race. The boat, aptly named ‘BAYANAT’ bears race number 71, a tribute to 1971, the year in which the UAE came into being. Flying the UAE flag and the UAE ensign, as Abhilash set sail from France’s Les Sables-d’Olonne port he helped create history as the first UAE-registered boat to participate in this race.

Over and above being a decorated Navy Commander, Abhilash is a sailing veteran. In 2012, he became the first Indian to complete a solo non-stop circumnavigation of the world by sea. He has also participated in several global sailing challenges, including the Cape Town to Rio Race in 2011, the Spanish Copa del Rey Race in 2014, and the Korea Cup in 2015 and 2016. This is Abhilash’s second participation in the Golden Globe Race. In the 2018 event, after a storm de-masted his boat, he sustained a life-threatening injury that forced him to withdraw. Abhilash had to learn to walk again and as part of his preparation for the Golden Globe Race 2022, has been preparing himself mentally and physically over the years.

“I need to complete this unfinished business. The pain of the Golden Globe Race 2018 is only motivating me to compete once again,” commented Abhilash Tomy. “It’s a gruelling challenge and, while I’ll be aiming to win, crossing the finish line is an achievement. The months of isolation, the physical exhaustion, the skills needed to win — this race has it all. I’m fortunate to have had the complete backing of Bayanat during my preparations and throughout the race, being a company that is both a pioneering force and a champion of progress for humankind.”

Hasan Al Hosani, CEO, Bayanat added: “Abhilash’s courage to take on the Golden Globe Race for a second time exemplifies the spirit of discovery and determination that Bayanat celebrates and champions every day. His values of courage and perseverance align perfectly with ours as we seek to be pioneers in AI-powered geospatial intelligence. We wish Abhilash and all his competitors a safe adventure ahead.”

During his journey, Abhilash will collect water samples at various points to aid Bayanat’s studies into the presence of microplastics in the world’s oceans. Additionally, a section of the boat will be painted with a specialized paint that will serve as a reflective target for satellites, capitalizing on a valuable opportunity to collect calibrated data for analysis during the race.

Everyone can follow the race Live as well as get the latest news by visiting the special dedicated website www.BayanatAroundTheWorld.ae where they can also leave messages of support and encouragement.